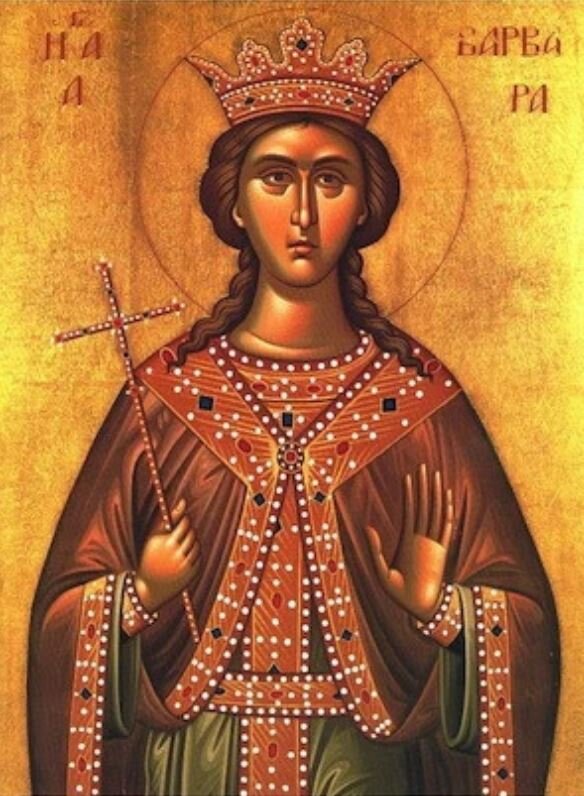 Saint Barbara was from Heliopolis of Phoenicia and lived during the reign of Maximian.  She was the daughter of a certain idolater named Dioscorus. When Barbara came of age, she was enlightened in her pure heart and secretly believed in the Holy Trinity. About this time Dioscorus began building a bath-house; before it was finished he was required to go away to attend to certain matters, and in his absence Barbara directed the workmen to build a third window in addition to the two her Father had commanded. She also inscribed the sign of the Cross with her finger upon the marble of the bath-house, leaving the saving sign cut as deeply into the marble as if it had been done with an iron tool. (When the Synaxarion of Saint Barbara was written, the marble of the bath-house and the cross inscribed by Saint Barbara were still preserved, and many healings were worked there.) When Dioscorus returned, he asked why the third window had been added; Barbara began to declare to him the mystery of the Trinity. Because she refused to renounce her faith, Dioscorus tortured Barbara inhumanely, and after subjecting her to many sufferings he beheaded her with his own hands, in the year 290.

Apolytikion in the Fourth Tone
Let us honor the holy Barbara for, with the aid of the Cross as her weapon, she crushed the snares of the enemy, and was rescued from them like a bird.
Kontakion in the Fourth Tone
O noble Champion, following God who is reverently praised in Trinity, you abandoned the temples of idols. Struggling amid suffering, O Barbara, you were not overwhelmed by the threats of the tyrants, O brave One, even singing aloud, "I worship the Trinity, the one Godhead."